Thank you for your patience while we retrieve your images.

Visitors 6
Modified 31-Jul-11
Created 31-Jul-11
41 photos
Frm the AP services:Garrett Richards was the ace in the hole for the Arkansas Travelers Saturday night.

Richards pitched eight shutout innings and the Travelers snapped their four game losing streak with a 4-0 victory over the Tulsa Drillers in front of an announced crowd of 6,875 at Dickey-Stephens Park in North Little Rock.

Richards (12-1) gave up four hits and struck out nine as he improved to 8-0 at Dickey-Stephens Park. He right-handeris 5-1 in seven starts this season against the Drillers.

“We needed a big start. He gave it to us,” interim Travs Manager Todd Takayoshi said. “He went out, threw strikes and made them swing the bat. If you do that, you give yourself a chance.”

The responsibilities of being the Travs’ No. 1 starter haven’t worn on Richards, the Los Angeles Angels’ No. 7 prospect according to Baseball America.

“When we go on streaks like that, I take it upon myself to pump us up a little bit,” said Richards, who is tied for the minor league lead in victories. “Go out, shut people down and try to give us a chance to win and get us back on top.”

The Travs took a 3-0 lead in the bottom of the fourth inning. Lopez hit a 1-1 pitch off Tulsa starter Cory Riordan (1-11) to left field for his eighth home run of the season to make it 1-0. Mercado followed with his third home run of the season for a 2-0 advantage. Left fielder Chris Pettit singled and came home two batters later on third baseman Jon Townsend’s RBI double to stretch Arkansas’ lead to 3-0.

Gabe Jacobo (2 for 4) added an RBI single in the seventh. 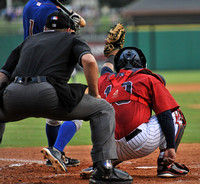 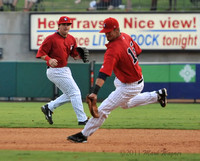